MOSCOW, April 2 – RIA Novosti, Lina Panchenko. In the Irkutsk region, due to a sharp warming and rapid melting of snow, an emergency was declared. In several settlements of the Irkutsk and Usolsk regions, more than two hundred garden plots were flooded. Local authorities set up temporary accommodation centers, organized pumping of water. The regional department of the Ministry of Emergency Situations claims that water has not reached the houses. However, in the village of Mamoni, it is reported that there is already knee-deep, but no one has seen the rescuers.

On March 29, hydrometeorologists warned residents of the Irkutsk region about a possible flooding due to warming. Due to the intense melting of snow, rivers and streams flooded. High water is expected in the first half of April in the southern, central and western regions of the region, and in the second – in the north. The heads of the administrations of villages and cities were advised to take care of round-the-clock monitoring of lowlands near water bodies. And the owners of the plots should independently clear the drainage channels around the houses.

On March 30, 26 sites in five settlements were reported to be flooded: Khomutovo, Urik, Bolshaya Elan, Granovshchina and Bolshezhilkino. In Irkutsk itself, the Solonyanka River overflowed the banks, water flooded the lowlands, and 71 vegetable gardens were damaged. 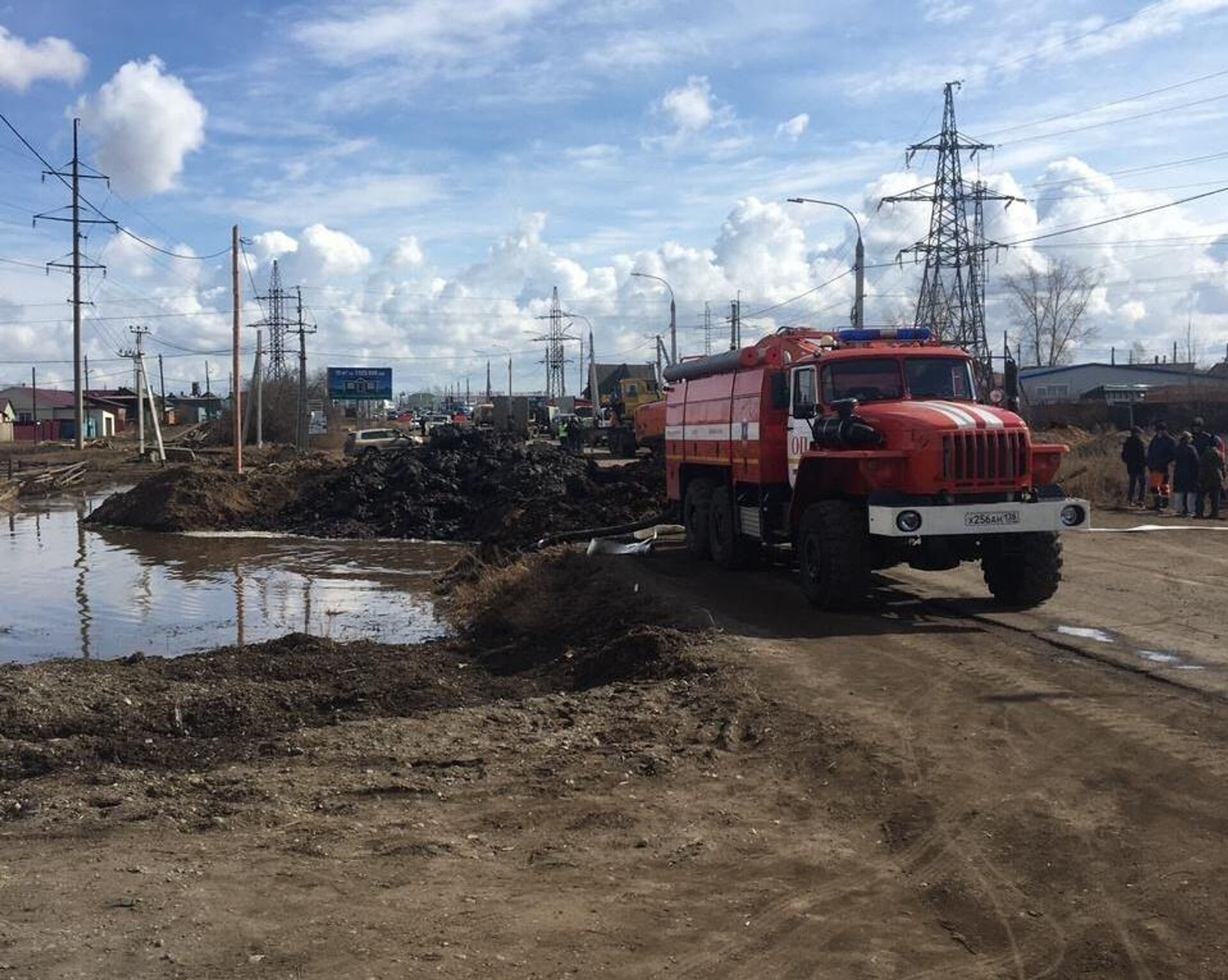 By the morning of the next day, the village of Stolbovo and the village of Biliktuy were flooded. It was already about 155 areas in the flood zone. An emergency was declared, temporary accommodation centers were prepared. Rescuers, road services have brought in equipment, they pump water from streets and yards around the clock, arrange dams in the fields, and fill in dams.

A day later, on April 1, the Ministry of Emergency Situations was informed about 204 flooded farmsteads. However, in some places the situation has changed for the better. For example, in the village of Urik, where eight courtyards were flooded, according to rescuers, the water left four. And in Granovshchina and Biliktui it is generally dry. In Irkutsk, after clearing 120 meters of the river bed, the water level dropped by 30 centimeters.

The situation will deteriorate

The village of Khomutovo, 15 kilometers from Irkutsk, suffered more than others. On April 1, 25 more plots were flooded there, 85 in total. Near Khomutovo there are fields thickly covered with snow. Last winter, precipitation was three times higher than the norm, now the snow is melting rapidly. Water gushed last weekend, the streets turned into rivers. 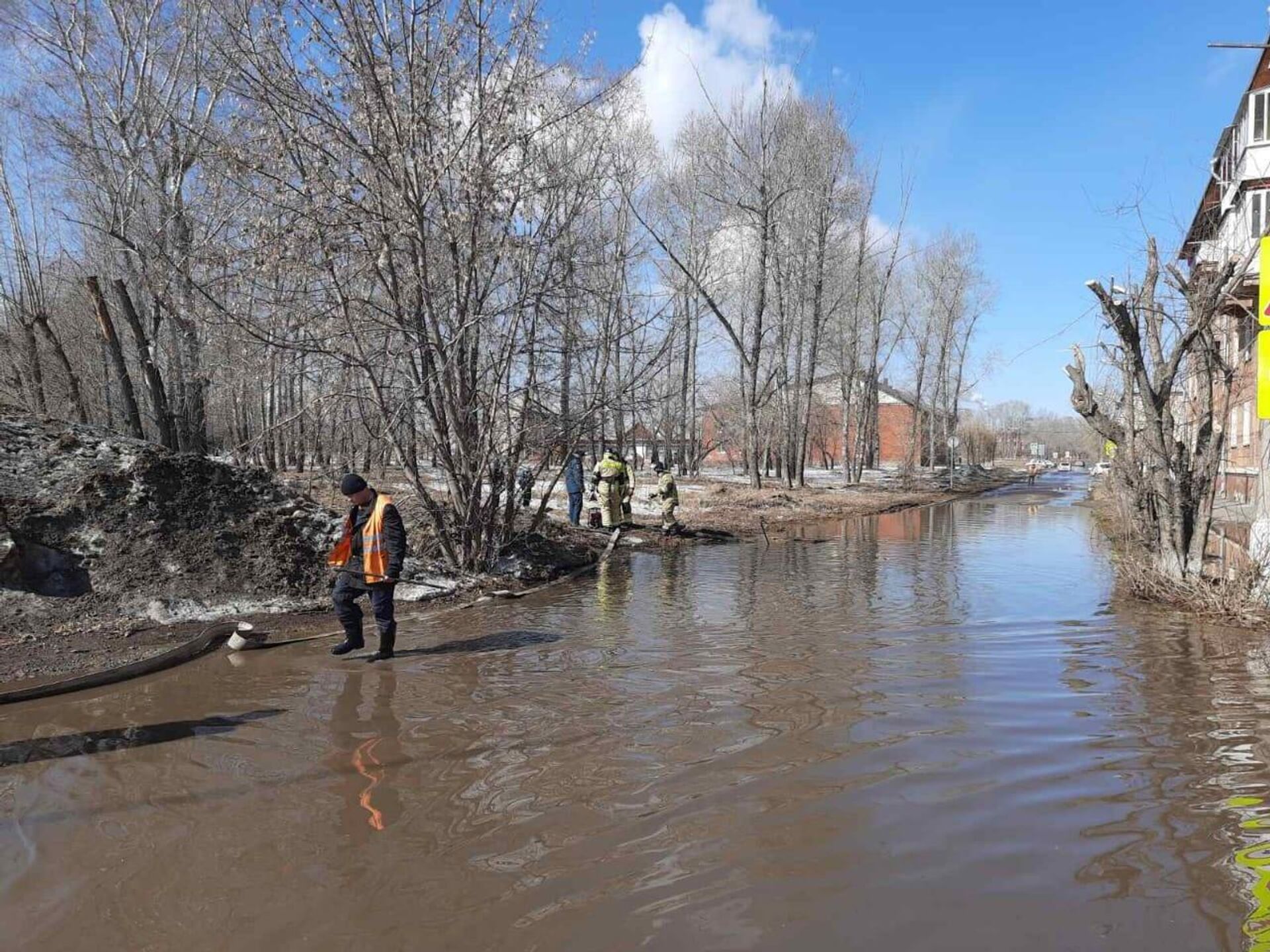 The regional road to Chomutovo was closed. The bus routes have been changed – at bus stops people cannot get on the transport.

On the page of the municipality, they explain: work is underway to deepen the ditch in order to divert water. On two streets of the village, the movement of heavy trucks was limited.

People are discussing the misfortune that has befallen them on social media. User “VKontakte” Tatiana posted on her page a photo of a street flooded with water. “How to swim to work tomorrow?” – she comments on the picture. Some found a way out: they move on horses. Drivers who have entered Khomutovo have to turn around, but they do not know where to go next, traffic police officers cannot get to the posts. Local children come to the rescue – they show the way to visitors.

Neither drink nor wash

One of the villagers complained that a well had been flooded in his yard, and dirty water was pouring out of it – neither to drink nor wash. The central heating was turned off. About 150 residents have lost their amenities.

They brought fire trucks with pumps. Rescuers pump out water, road workers prepare a drainage pipe. But you can lay it down only after the water subsides. And when this will happen is unknown. The administration's forecasts, which are published several times a day on social networks, are disappointing: the level of melt water will rise in the near future, and the situation will worsen. But residents are urged to remain calm: there is a temporary accommodation center, lifeguards are on duty, ready to transport people on boats, if necessary. 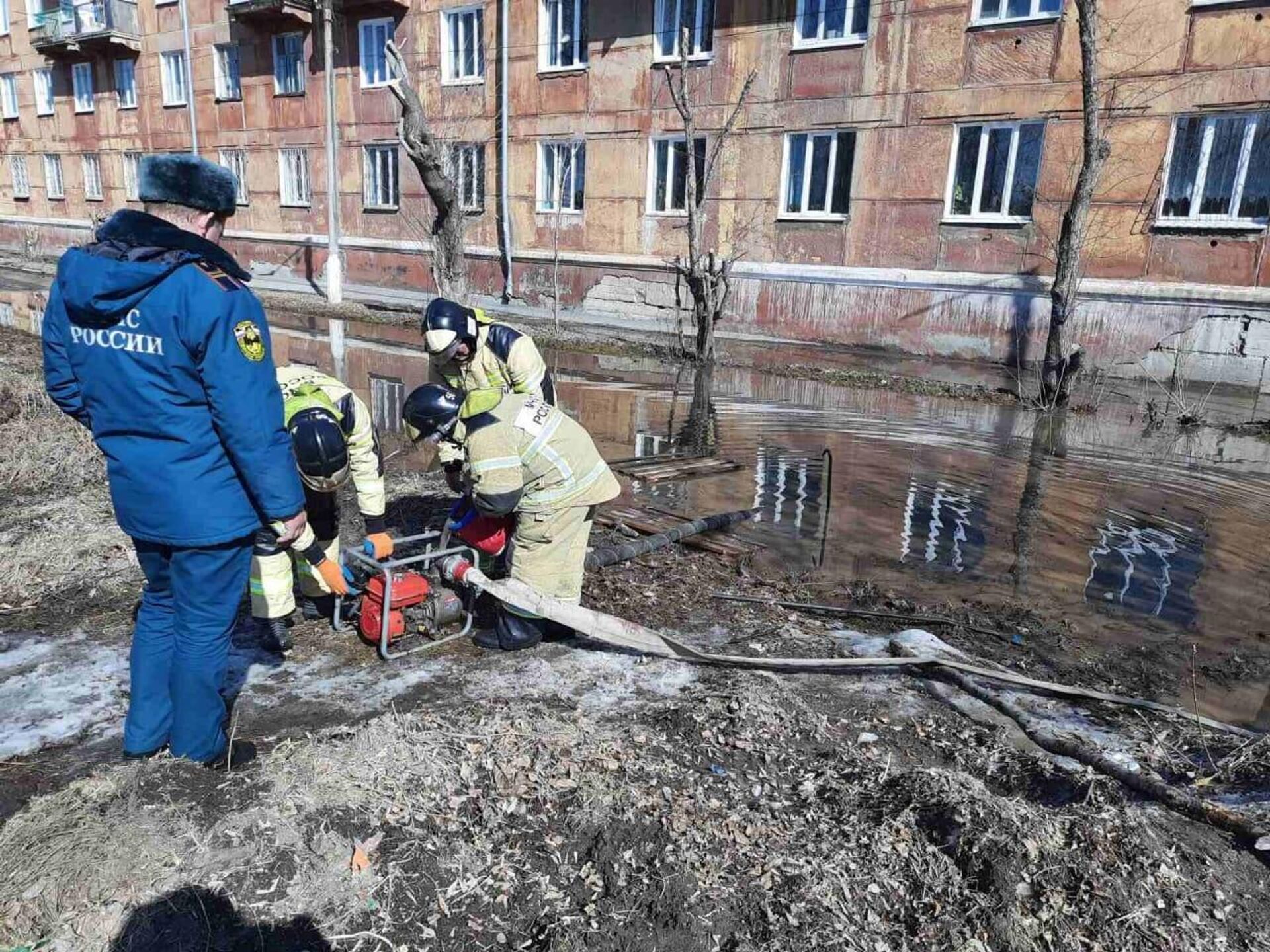 “The flood heats up the adjacent territories. The water has entered only on the plots. None of the houses has it. The accommodation point is located in the sports complex. But so far no one has applied there. They asked either to take them to their relatives or to Irkutsk,” RIA Novosti told RIA Novosti village administration representative Alexander Parfentiev.

They did not take control

Among the settlements, the rescue of which in each new report is reported by the Ministry of Emergency Situations in the Irkutsk region, there is no village of Mamoni. And there the situation is dramatic: dwellings were flooded.

There is a video on the social network: people walk on flooded parquet in rubber boots, water – no less than ankle-deep. Household utensils float in this “pool”. A woman's voice comments: “Maysky Lane. This is the situation at two o'clock in the morning. Water entered the house in five minutes and runs without stopping. We were left without equipment, without furniture. Now it will come to the sockets, and it will be fine. We have wooden floors, I won't lift the refrigerator alone to put it on at least something. I can't leave the house either, because there is water up to my waist. And I will not open the doors – the water is running straight into house”. 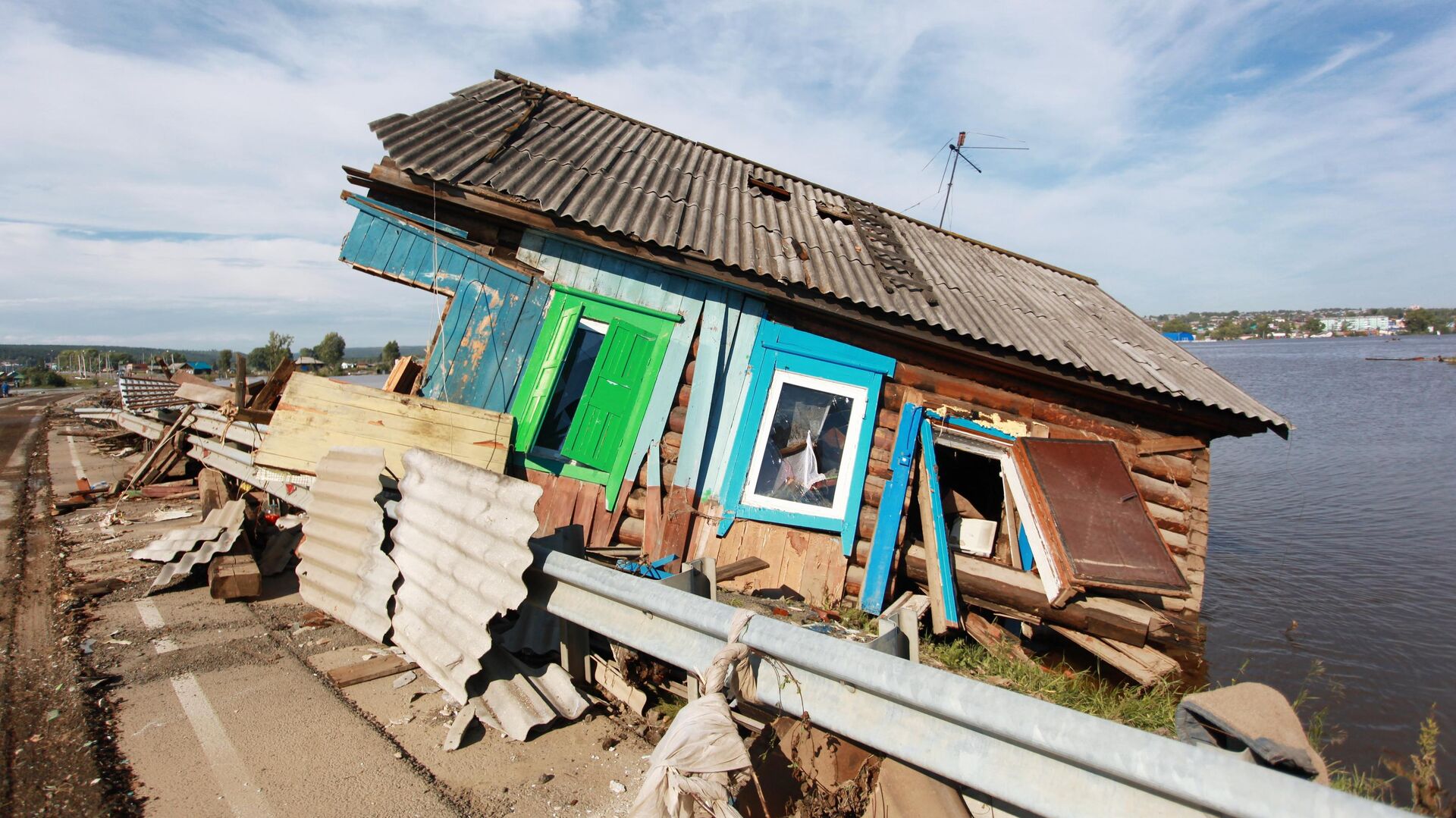 It was not possible to get through to the leadership of the village – they did not answer any of the phones. The district administration could not explain what was happening to us.

The regional department of the Ministry of Emergency Situations said that they had checked the post published on the social network. “I know what you are talking about,” said the head of the press service Svetlana Kanina. “We phoned the local administration. They went there and figured it out.” As Kanina explained, a large stone fence separates the site on which the house is located from the neighbors, whose yard is located above. And behind this fence, melt water accumulated, which could not find a way out. “At one point, all this spilled onto the neighboring plot, and water got into the house. We were promised to resolve this conflict situation, to provide targeted assistance to the affected family. That is, there is no permanent flooding, so we did not take control of the situation.”

Everything is ruined – floors, furniture

The RIA Novosti correspondent contacted two residents of the village. One, who identified himself as Vasily, said that he lived in Starye Mamonov, and an emergency situation developed in Novy. “Water goes into houses, drowns people,” he confirmed. And he even suggested why this is happening: “It looks like the drains did not do it.” 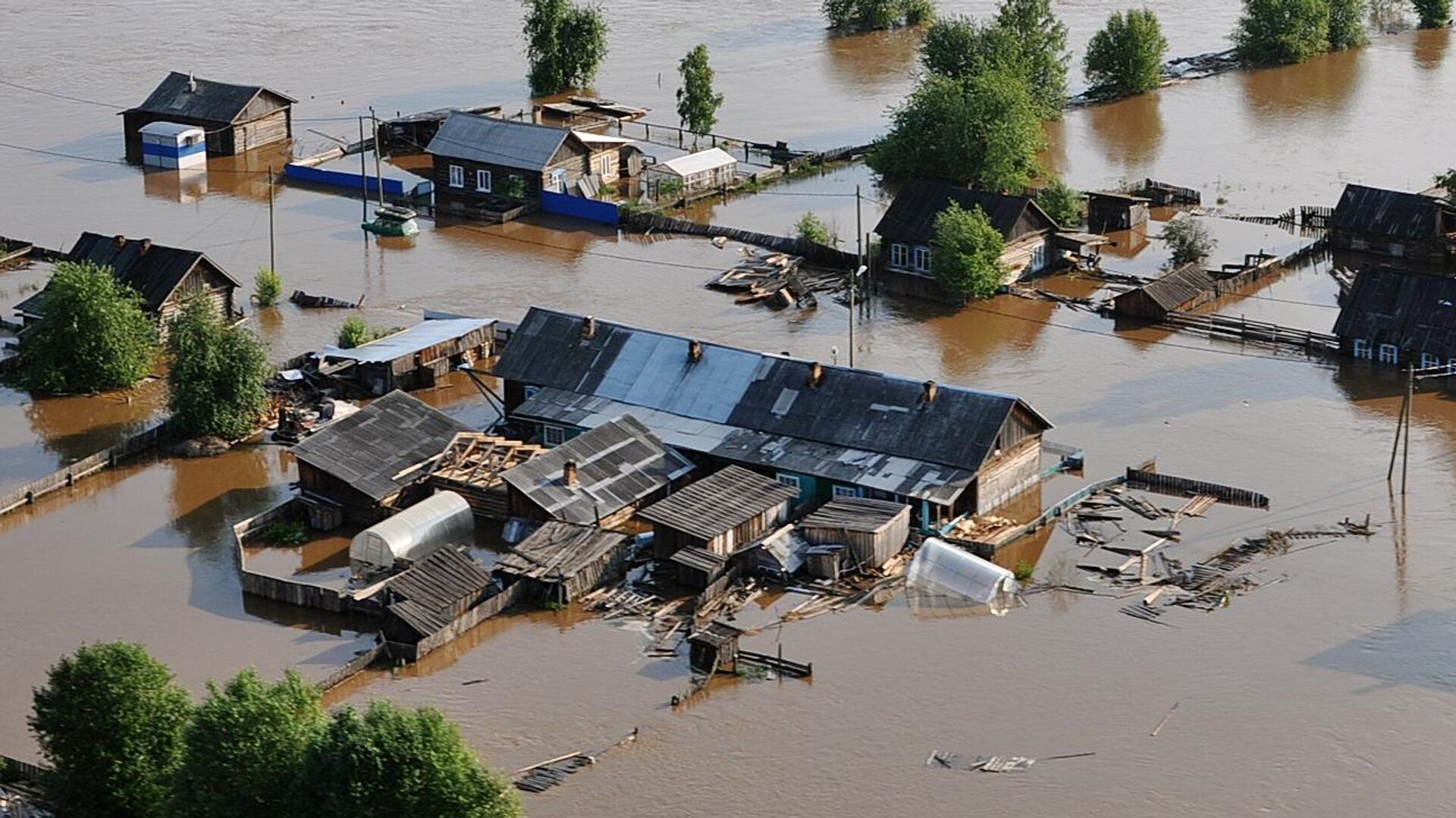 A resident of another part of the village, Elena, with whom we spoke on the phone, said: “We live upstairs, and it floods us. And in the lower part, near Old Mamonov, there is no water – it leaves the river. We think that the river has overflowed its banks, from and it flows. ” The girl explained that the street had warmed up sharply. “It's hot – eleven degrees. The floors in the house got wet about four days ago.” First, the water was wiped off with a rag. But the basement was flooded. And later, at night, it poured out very quickly.

“Now about knee-deep. The floors and furniture are damaged. The electricity has been cut off.”

In the courtyard, adds Elena, it is impossible to pass: “The barns are flooded.” “We have a dog, two cats. We took them and went to our relatives in New Mamoni, while we live with them.”

Similar, according to her, and the neighbors. How many damaged houses, she found it difficult to say – “maybe thirty.” The village store was also flooded. But the administration was not affected by the disaster. Elena's relatives called there. “No answer.” The family is going to demand compensation for the damaged property. “It smells very damp, you will have to change floors, furniture. The tables have fallen apart.” Nobody saw the rescuers in the village.

In the Main Directorate of the Ministry of Emergency Situations in the Irkutsk region, RIA Novosti promised to find out what is still happening in Mamonov.