MOSCOW, March 9 – RIA Novosti. Smoking is a bad habit that leads to health and physical problems. Why smoking is harmful, what is the effect of tobacco, electronic cigarettes and hookah on the body, as well as how to quit smoking correctly – in the material of RIA Novosti.

– It seems to many that nicotine, which is part of cigarettes, has the most detrimental effect on the human body. Yes, of course, it is harmful and addictive, but there are other chemicals in cigarettes that have a carcinogenic effect on the body, '' psychiatrist and narcologist Natalya Tishchenko told RIA Novosti.

Tobacco smoke contains about 4000 chemical compounds. The most dangerous of them are benzene, acetone, arsenic, ammonia, lead, mercury formaldehyde and acetaldehyde.

The effect of smoking on the human body

– The harm of smoking is obvious. First of all, it is bad for the respiratory system. Shortness of breath, cough, weakness appear, – the doctor noted.

Smokers are more likely to develop asthma or chronic obstructive pulmonary disease. It has been established that the risk of developing bronchitis and pulmonary emphysema in smokers increases 10 times.

– Nicotine and other toxic substances from tobacco smoke have a negative effect on the brain. Under the influence of nicotine, its blood supply is disrupted. Smokers deteriorate attention, memory, ability to logic and coordination of movements is impaired. In addition, smokers are more likely to be overworked, they tolerate ordinary loads worse, – said the narcologist.

An experienced smoker often has increased levels of anxiety and an increased likelihood of developing depression. The effect of cigarettes on the brain can also be manifested by frequent headaches, insomnia, neuroses and psychosis.

Nicotine and other toxic substances from cigarettes also have a negative effect on the cardiovascular system. Her diseases represent the greatest danger for nicotine addicts, they are associated with 48% of premature deaths caused by smoking cigarettes. “Smokers often have heart rhythm disturbances and a predisposition to high blood pressure,” the doctor said.

According to studies, smokers have a 2-4 times higher risk of death from myocardial infarction and stroke than non-smokers. In addition, smoking increases blood cholesterol levels.

According to the expert, disorders of the gastrointestinal tract are a frequent result of cigarette use.

Tobacco smoke, entering the oral cavity, acts on the salivary glands, increasing the secretion of saliva. Together with it, nicotine and other substances enter the esophagus, stomach, where they irritate the mucous membranes, destroying the protective layer and making them more vulnerable to hydrochloric acid. As a result, there are such consequences as: – a feeling of nausea, heaviness; – internal bleeding; – the formation of stomach ulcers; – belching and heartburn; – increased production of hydrochloric acid; – a decrease in the rate of contraction of the walls of the stomach.

In addition, most of the nicotine from tobacco smoke goes directly into the bloodstream, entering the brain and affecting the hypothalamic region, where the centers responsible for hunger and satiety are located. As a result, the digestive organs do not emit enough juices during the digestion of food or begin their enhanced production when it is not needed at all.

According to scientists, smoking doubles the likelihood of developing functional dyspepsia.

Frequent smoking of cigarettes or devices replacing them often leads to disruption of the endocrine glands: thyroid and genital. Smokers can be hot-tempered and irritable, and also have sexual problems, as nicotine affects the synthesis of hormones.

In this regard, smokers are often diagnosed with infertility and impotence.

Toxic substances in cigarettes have a reduced taste experience for most smokers, as a thick, viscous coating builds up on the tongue that blocks food's access to taste receptors.

Also, the smoker's sense of smell is impaired, the ability to perceive smells is reduced. In addition, the nasal mucosa becomes inflamed due to smoking, which can lead to a chronic runny nose.

What is the harm of smoking

The dangers of smoking for teens

The main harm of smoking for adolescents, according to the doctor, is due to their physiological immaturity. The human body is fully formed only by the age of 20. For this process to go well, all these years, the cells must receive the right amount of oxygen and nutrients, and when smoking, toxins from tobacco smoke are added to them.

In addition, in adolescence, nicotine addiction develops much faster than in adults.

The harm of smoking to women

In addition to the fact that toxins from cigarette smoke affect all the internal organs of women, their effect also affects their appearance. The skin on the face ages faster and loses its elasticity, rashes appear. Nails and hair suffer from oxygen deprivation, become dull and brittle, grow more slowly, and look faded. The teeth are gradually destroyed by tobacco smoke, there is a constant fetid odor from the mouth.

In addition, inhalation of tobacco smoke negatively affects reproductive function. Women who smoke more often cannot become mothers. Among them, infertility is much more common than among those who have never smoked.

The harm of smoking for men

Carcinogens in cigarettes affect a man's reproductive function no less than all other systems in the body.

Due to toxins, testosterone synthesis slows down, which is fraught with a decrease in libido and a deterioration in sperm quality. In heavy smokers, their movement slows down. This directly affects the possibility of conception.

In addition, due to disruption of the central nervous system and insufficient blood supply to the corpora cavernosa, it can lead to the development of diabetes mellitus, which leads to impotence. 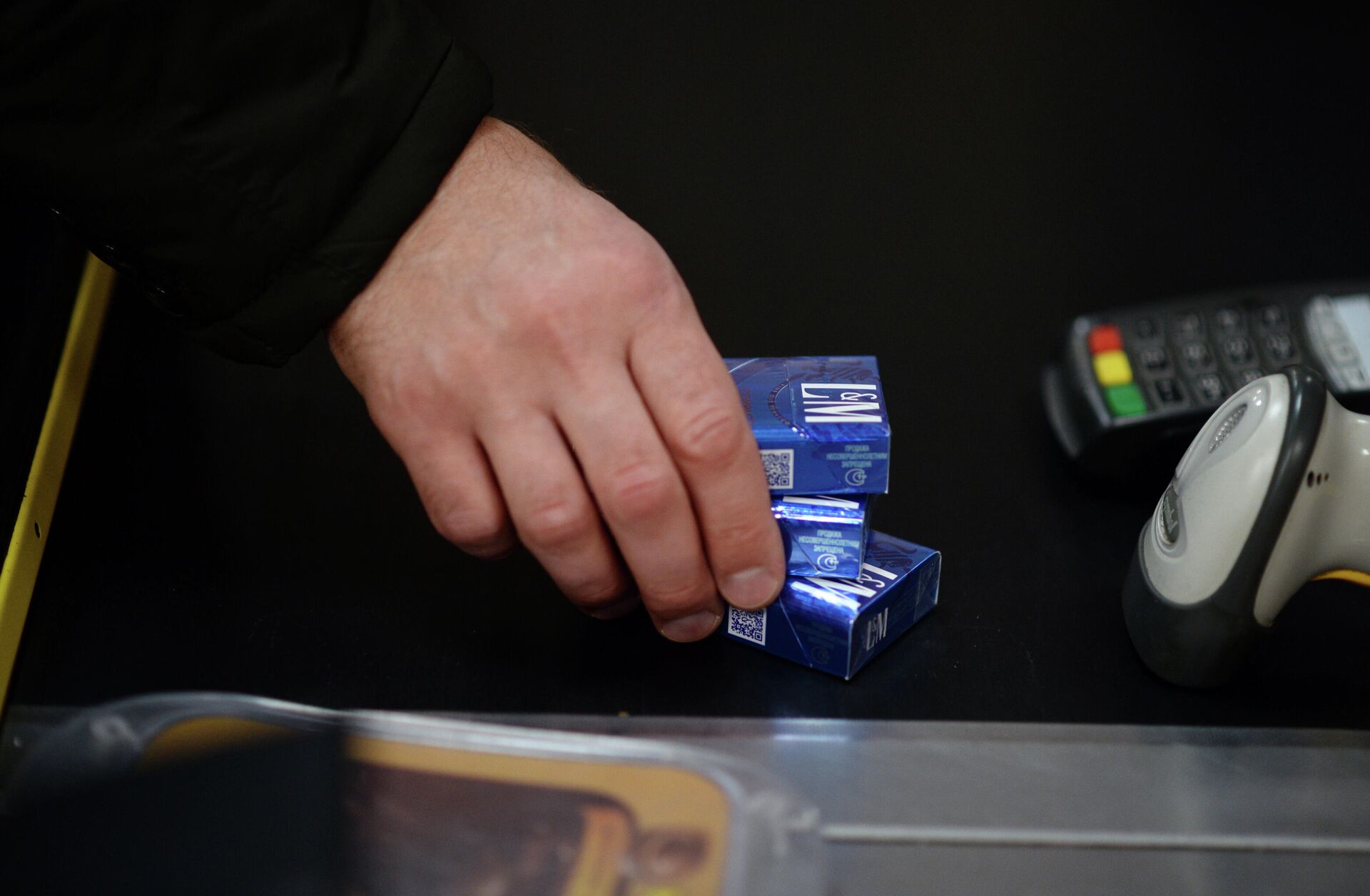 Harm of smoking during pregnancy

Smoking is a risk factor for complications during pregnancy, scientists have found.

All carcinogens from tobacco smoke enter the woman's bloodstream, and then to the child. Nicotine, in turn, constricts blood vessels, including those in the umbilical cord. Because of this, the amount of oxygen supplied to the baby is reduced. Subsequently, there is a high risk of having a baby with severe asphyxia.

In addition, if a child has received nicotine for 9 months, then after birth he will have a nicotine withdrawal syndrome. – There is a myth that if a woman uses cigarettes at the beginning of pregnancy, then it is necessary to continue doing this, it is supposedly harmful to quit smoking abruptly, since the child will be worse. The harm of smoking during pregnancy is obvious, therefore, you can tie up with a bad habit at any time, – said Natalia Tishchenko.

The harm of secondhand smoke to others

Sidestream smoke with a high concentration of carcinogens is considered even more toxic than mainstream smoke. It also contains small particles of harmful substances (ammonia, benzene, cadmium, cyanide formaldehyde), which more easily penetrate the tissues of the body, such as the lungs.

There is no safe level of secondhand smoke. Even a few minutes of being near a smoking person is harmful.

In addition, smoke after smoking indoors does not disappear, but partially settles on surfaces: furniture upholstery, floors, car interior. This “waste” from cigarettes is called tertiary smoke. It is especially dangerous for children, who, for example, often crawl on a dirty carpet.

Harm of alternative types of smoking

It seems to a person that he is replacing a harmful cigarette with a “harmless” hookah or “aikos”. However, according to the specialist, other tobacco products contain the same carcinogens that negatively affect the body, like regular cigarettes. Moreover, nicotine dependence on them can develop even faster.

– For example, when smoking electronic cigarettes or vaping, a person takes puffs and does not control the amount smoked. As a result, it turns out that he can take more nicotine, since he cannot track how much he used. Addiction in such cases is formed faster, and the harmful effect on the body is stronger, – said the narcologist.

The same happens with tobacco heating systems. Due to the fact that they practically do not emit tobacco smoke and a pungent odor, many smoke them indoors: in cafes, restaurants, at home in the kitchen. The smoke from tobacco heating systems and from ordinary cigarettes is equally toxic to the bronchi and lungs. – At the same time, if earlier someone was too lazy to go to the balcony or go out into the street, then sticks can be smoked at home, which means that more of them are smoked. And there are also sticks, which include glycerin and propylene glycol, which clearly cannot but affect the body negatively, – the doctor emphasized.

Hookah lovers should be aware that long-term smoking leads to inhalation of more nicotine smoke compared to the consumption of regular cigarettes.

– If, when smoking cigarettes, a person makes 8-12 puffs, then in the case of a hookah there are 50-100 of them, each of which contains nicotine. For one hour of hookah smoking, a person smokes about a pack of cigarettes. Also, when smoking a hookah, foil is often used, which, when heated with coal, emits aluminum vapors, which are not at all useful for the human body, – noted Natalya Tishchenko.

There are nicotine-free hookah mixes on the market, but they are also harmful to the body, as they contain preservatives, dyes, and flavorings. Hookah cannot completely clear the smoke from combustion products, which means that when heated, many toxins are released that affect the nervous system no worse than cigarette tobacco. Inhaled smoke often leads to lung cancer, heart disease and other ailments, experts say.

How long is nicotine excreted from the body?

There is no single formula by which it is possible to calculate how much nicotine will be completely eliminated from the human body. – It all depends on the age of the smoker, the length of time of use, whether it was a one-time intake or smoking lasted several years. Also, a lot depends on the strength of cigarettes – the amount of nicotine that is part of them, – said the narcologist.

Nevertheless, according to the expert, it is generally accepted that nicotine leaves the human body on average from 7 to 21 days.

How long do smokers live?

– There is also no single formula that can be used to calculate, for example, how much less a patient will live if he smoked 1,500 cigarettes. It all depends on his body. However, it is believed that one smoked cigarette shortens life by 10-15 minutes, the expert explained.

How to quit smoking

There are many ways to quit smoking. According to Natalia Tishchenko, the following algorithm can be effective: 1 Set a date when you can actually quit drinking 2 Find yourself a business that will distract you for a few days 3 Remove all ashtrays, cigarette packs and lighters from sight 4 Drink enough water and Keep a full bottle next to you 5 Try to be physically active – it helps you to relax 6 Speak optimistically 7 Change your daily habits: take a different route to work, a different route to the store 8 Don't look for an excuse to smoke again: a stressful situation or a holiday is not a reason for this to take up cigarettes. As soon as you afford one, a second and a third will follow. At the end of the week, buy something nice with the money you used to spend on cigarettes.10 Watch what you eat. Try to eat more fruits.

– The sensations of quitting nicotine are unpleasant, but they are a sign that the body is recovering. All of them will pass in a week or two. In the case when you cannot quit smoking on your own, you should seek help from a psychiatrist-narcologist. An integrated approach helps to get rid of this bad habit and sets the mind on the refusal of tobacco products in the future in any form, – said the narcologist.