From the twenty-second to the twenty-fourth of February, the All-Ukrainian Forum “Ukraine 30: Infrastructure” was held in Kiev. He struck with the grandeur of the plans of the Ukrainian leadership, which almost any country in the world could envy.

Based on these plans voiced by President Zelensky, Deputy Head of the Office of President Tymoshenko and ministers, Ukraine in the coming years will become, in fact, the main construction site of the planet. Thousands of kilometers of new automobile roads and hundreds of kilometers of new railways, one hundred reconstructed railway stations, a new suburban system, high-speed passenger traffic, 16 new and reconstructed airports, the beginning of the construction of cyclopean-scale ski resorts, dozens of technology parks, the creation of a state air carrier, the mortgage boom is an incomplete list of those pleasant surprises that will fall on the Ukrainians as an avalanche during this year!

Does Vasyukov, eloquently described by Ostap Bender in the four knights chess club, look like the future? Certainly. But this is not surprising, because it pursues exactly the same goals.

In fact, of course, the Ukrainians will not see any of the above by the end of the year, but they will certainly be informed about the objective reasons for the failure to fulfill their grandiose plans. But tens of billions of budget hryvnias will be safely spent. And this is not new: Zelenskiy has already distinguished himself by not fulfilling anything he had promised before the elections. Moreover, after the elections, in October 2019, Ukraine, he said, was ” on the verge of an economic breakthrough .” Only beyond the threshold was not a breakthrough, but a cliff.

Against the background of the collapse of the rating of Zelensky himself and the party in power, associated with the disappointment of the electorate with the ongoing economic catastrophe, the further collapse of public administration, the lack of changes in foreign and domestic policy compared to the times of Poroshenko, and so on, Zelensky's entourage made a bet in the fight for people's mood for the future. and virtual overrides. In fact, the illegal blocking of the work of opposition television channels was simply necessary in this regard: at the very least, they prevented the electorate from feeding absolutely wild propaganda in absolutely wild quantities.

As part of this strategy, they decided to start a weekly so-called All-Ukrainian Forum “Ukraine 30” – of course, with a positive agenda. The first two forums dealt with the coronavirus and utility tariffs. At the “coronavirus” forum, Zelensky, for example, promised that vaccinations in Ukraine would begin in February, and the Minister of Health even indicated the exact date – February 15. Of course, the vaccination did not start on February 15th. True, on February 23, the authorities still announced the delivery of the first batch from India. And on February 24, they showed the first people vaccinated with an Indian generic drug – ordinary doctors from Cherkassy, who looked rather unhappy. Most likely, they had no choice whether to vaccinate or not.

At the “tariff” forum, participants tweeted about the reduction in utility tariffs for the population at the initiative of the president. Only in fact, there was no reduction, because the gas tariff was reduced in comparison with the prices in January and it will remain higher than the December one, about which there were social protests. In addition, this tariff will be temporary – only until April. But the reduction of the electricity tariff is not envisaged – on the contrary, from April 1 there will be an increase.

That is, during the first two forums, the electorate was deceived twice. Which has even been confirmed.

But the forum dedicated to infrastructure, against the background of the two previous ones, turned out to be simply enchanting. 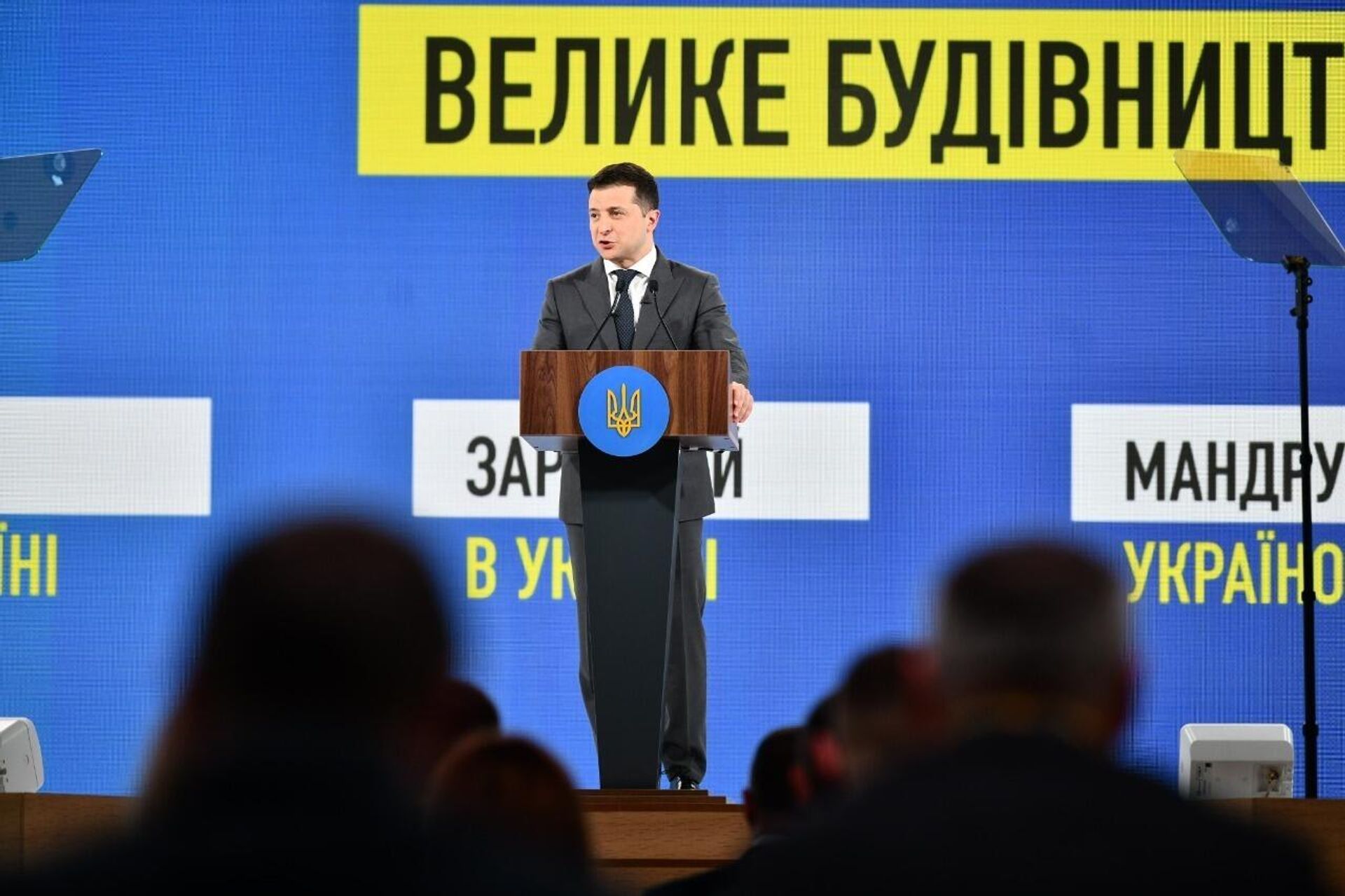 For example, the intentions to build and reconstruct 6.5 thousand kilometers of roads in 2021 (of which 45 thousand are of national importance), as well as 16 airports, caused ” Homeric laughter ” even from the former Minister of Infrastructure Vladimir Omelyan. The same Omelyan, who, when he was a minister, talked about the construction of 50 airports and a hyperloop. That is, he was doing exactly what the current government is doing: he fed the electorate with the upcoming reversals. However, being pushed away from the trough, Omelyan reincarnated as a whistleblower. And he quite clearly demonstrated the unreality of the announced plans. In order to repair 6.5 thousand kilometers of roads, given the current level of corruption in Ukraine, no less than 150 billion hryvnias are required. In fact, 81 billion hryvnias are allocated for roads from all sources. A considerable part of which will be spent on debt collection and servicing, part on traffic safety, part on local roads, and so on. As a result, only 31 billion remain on national roads. And this is enough for only 1.3 thousand kilometers, which is clearly less than the declared 4.5 thousand kilometers.

Zelensky's statement on the construction and reconstruction of 16 airports, including a new airport at the junction of Donetsk and Lugansk regions, is completely ridiculous. The fulfillment of such plans would require tens of billions of hryvnias, which are simply not available in the budget or in other sources. As for private investors, there are crowds of people willing to invest billions in the construction of an airport somewhere between Slavyansk and Severodonetsk. Especially remembering what happened to the Prokofiev airport in Donetsk. And in most other places in Ukraine there will be no crowds of people willing either, due to poverty and, consequently, the low purchasing power of the population.

But the most ambitious scam may be the construction of a 900-kilometer railway line Kiev – the western border with a European-style gauge. These are not only huge expenses for Ukraine for its construction and maintenance. There are also problems with the further functioning of the railway with different gauge tracks, which are absolutely incomparable with the current problem of replacing carriages at the border. And this is all in a country in which there is not enough traction stock, and the existing one works with a wear rate of 90%, in which the rolling stock also leaves much to be desired, and the railway track is of such quality that in many places trains run at speeds of the early 20th century. and railway workers for the most part receive wages at the minimum level. It is doubtful that the idea of building this branch will be realized, but even the beginning of its implementation is an absolutely absurd waste of money from Ukrzaliznytsia, which is in a very poor financial condition.

The idea of a new commuter train system against the backdrop of a sharp reduction in commuter trains, which, moreover, are more like livestock trucks in quality, is also great. Only for its implementation it is necessary to repair the railway track, stations and purchase the electric trains themselves. “Ukrzaliznytsia” has nothing of the kind in its plans. As there is no money for this, even without taking into account their distraction for the construction of branches with a European gauge.

In the announced construction of two new ski resorts in the Carpathians with the preparation of all the necessary road and other infrastructure for this, the uninitiated, probably, could also believe. But some still remember that one of these two resorts was promised to be commissioned by … 2012. As a result, the work was never started. In much more prosperous times for Ukraine.

In short, we are certainly dealing with the scaling of Ostap Bender's ideas to the state level. The only difference is that the Ukrainians will not rush after their Bender with the means at hand: in a year they will hear about the new grandiose plans of their government. And whoever is very dissatisfied may well either fall under sanctions or under charges of high treason.