MOSCOW, February 10 – RIA Novosti, Maria Semenova. The vacation trip is called “flying to the mainland” here. Even though they do not live on an island, transport accessibility is no better. Chukchi villages on the shores of cold seas covered with ice in winter can only be reached by helicopter. Frequent guests here are polar bears. People are protected by special patrols: they drive away predators with the help of dogs and light and noise signals. During the season of bearish activity, the brigades bypass settlements every day – sometimes the “masters of the Arctic” are met five times a day.

The first such patrol appeared in Vankarem 15 years ago. “Local television reported that a girl had died from a polar bear in the neighboring village of Ryrkaypiy. I then wrote a letter to several addresses, including the district leadership, with proposals on what should be done to protect people. This somehow got into WWF Russia The response from them came on January 11, 2006 – one might say that this is the patrol's birthday, “says Sergei Kavry, a resident of Vankarem, the initiator of the movement.

Together with like-minded people, he engaged in patrolling, and also began to achieve lighting of the outskirts of the village and public places: a store, a gym, a school, a kindergarten. Of course, there were street lights, but very few. 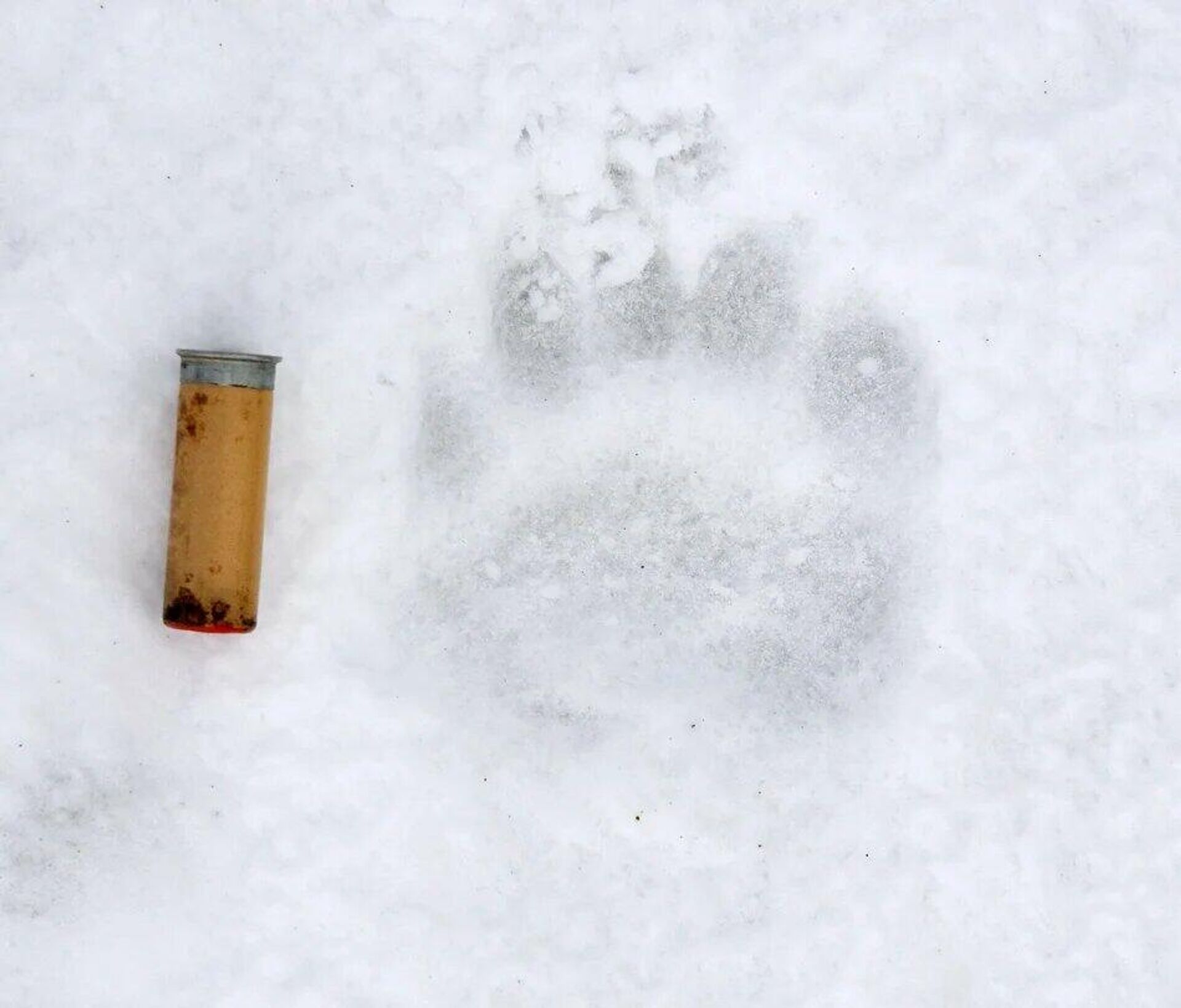 Shooting of polar bears is prohibited, there are no quotas for them even for the indigenous population, so the only weapons of the patrolmen are a lantern and “Hunter's Signal” – rockets that explode brightly like fireworks.

At first, mistakes happened: either the light source was installed so that it dazzled the eyes of the inhabitants of one of the houses, then the patrolmen did not accidentally chase the predator away, but sent it just to the village.

“They saw the bear behind the runway. They sent patrolmen, they fired a light-noise rocket, the charge flew over the beast and exploded. The frightened bear ran to the village. I understood: an unforeseen situation, jumped out in slippers. And he rushes to the gym where the children are. I fired a shot and hit the bear in the nose. It turned around. It was a lesson for us how to use light and noise repelling means. Nobody got hurt, everything worked out. It didn't happen again, because we worked correctly, “recalls Kavry.

According to Sergei, the most active time for patrolling is eight in the morning, when the children are taken to school, and in the evening, around 6 pm.

“Any predator is a hunter”

They also work with local residents. “They explained: if there is a patrol, this does not mean that you can walk in peace. We must remember the times when everyone was responsible for himself. Campgrounds without light and patrolling somehow survived.” 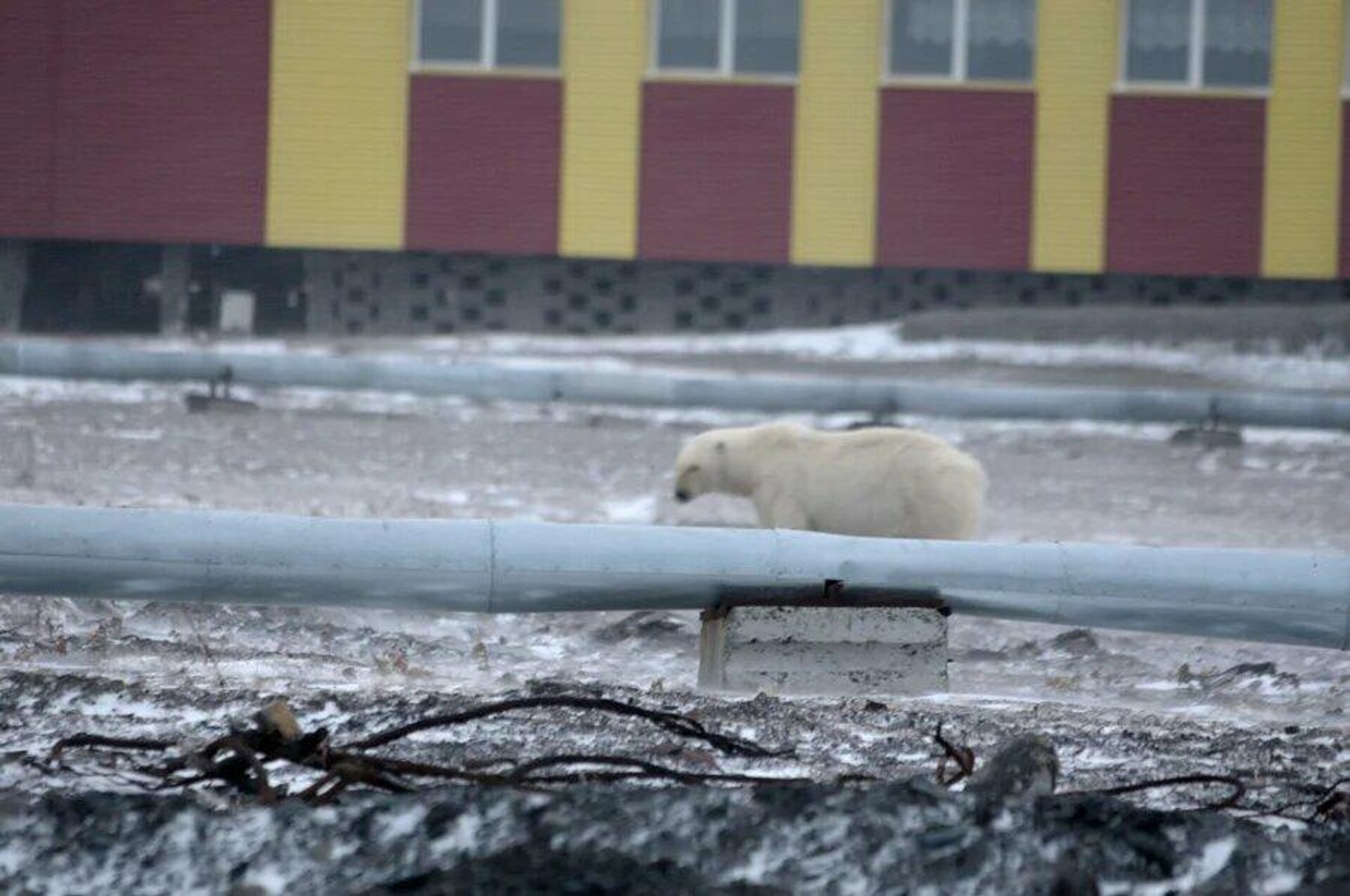 With young children – activities in a playful way. “You have to listen to the dogs: they bark at the bear not as usual, but brightly, loudly. But you need to determine the source of the sound. We conducted trainings:“ Vasya, you are a polar station, Gleb is a school, Sasha is a hospital. Dasha, stand in the middle, close your eyes. Where does the barking come from? Yeah, from the polar station. “

Seeing a polar bear, the interlocutor emphasizes, in no case should you run, because any predator is a hunter, he will rush after.

“Slowly retreat to the nearest shelter: look left and right, find a fire escape, a container, a shed, an abandoned house. You can hold a stick in front of you: a polar bear hunts a walrus, but if he turns and raises his fangs, who wants to mess with him? The Arctic needs to carry a walkie-talkie, a telephone, a flashlight, a flare, a flare gun, a gas canister, “Sergei lists.

In the end, the Vankarem patrol eventually parted ways with WWF-Russia, which has been funding predator watchers for many years: Sergei is actively advocating for the revival of the traditional culture of the local population, which includes hunting polar bears. “Now they are opening our graves. The shooting regulations are wrong: while the animal is eating a person, you need to call and get permission. 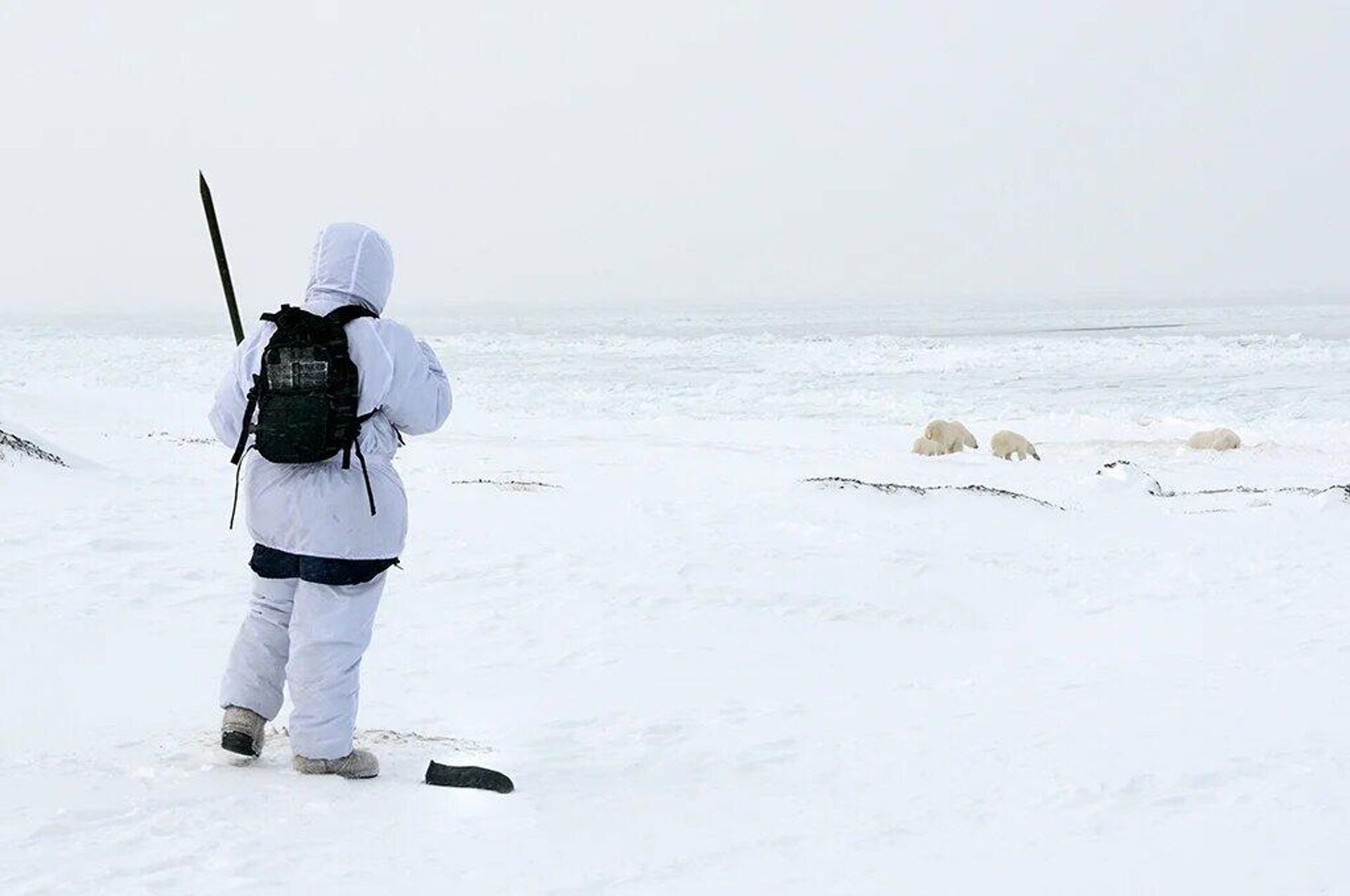 However, not all Chukchi colleagues share his point of view.

“They are not afraid of anything”

Another “bear patrol” operates in the village of Ryrkaypiy, which is about two hundred kilometers from Vankarem; there is a brigade in Billings, 400 kilometers to the west.

Officially, the Billings patrol is the youngest. WWF Russia and then local media reported on him in October. But in fact, a local resident Boris Ivashev and several of his associates began to drive the predators back almost ten times on their own. Ivashev is sure: clubfoot, like humans, have their own character. 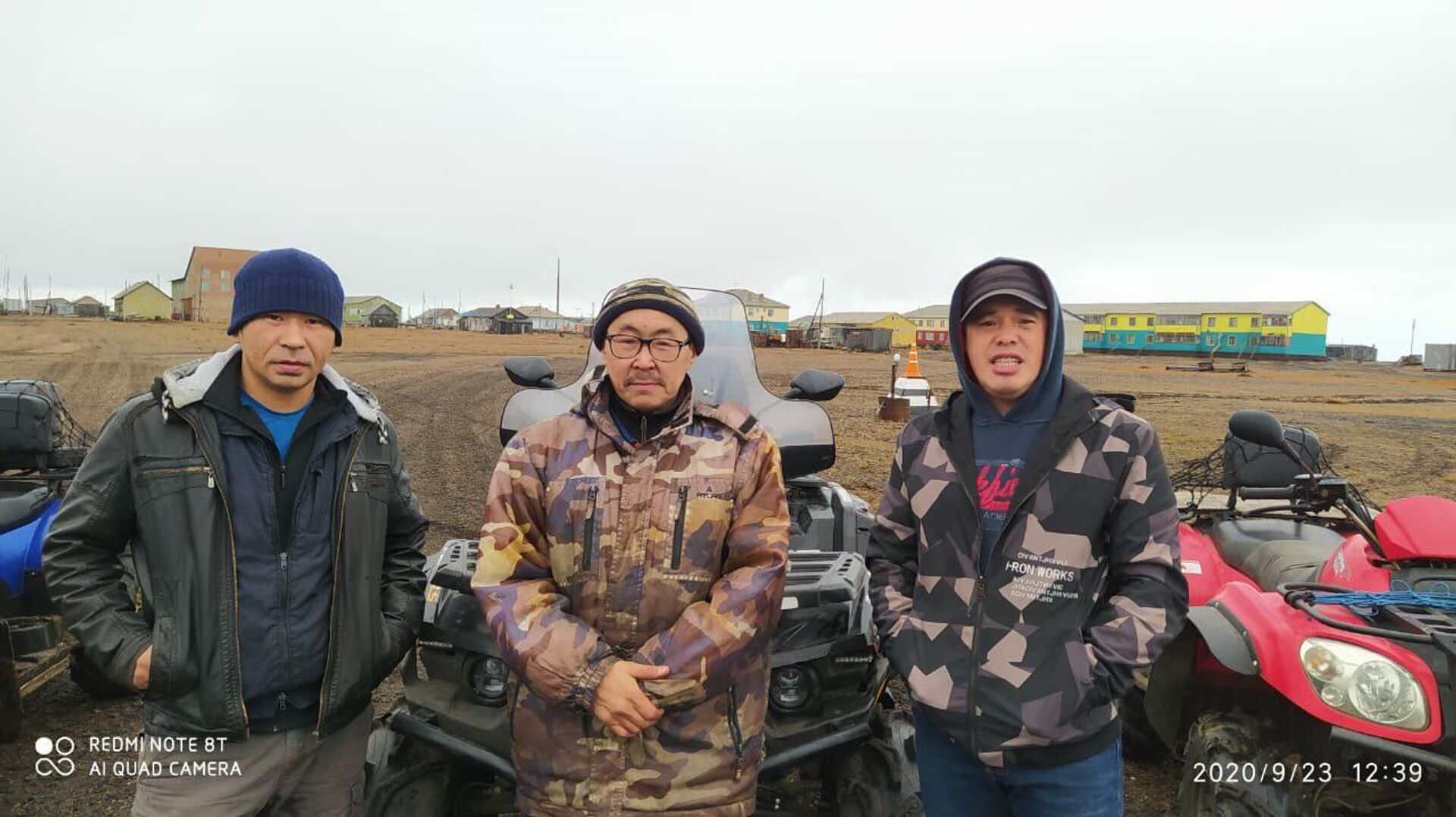 “Some bears do not react to light rockets at all, others will see from afar and run away at breakneck speed. People are all different – animals are the same. For those who are not afraid of anything, there are dogs or a tractor – they will definitely run away from him. But it happened. , we drove up, and a bear walked directly onto the dump truck, such a stupid one – it is clear that he never saw either a car or people. He tried to smell us. We beeped him, “Hunter's signal” was fired – it was useless. Until the dump truck moved, ran away, “- recalls Ivashev.

Everyone in Billings who sees a bear warns the patrolmen and everyone they can: word of mouth spreads quickly. Parents immediately pick up children from the streets, adults move with caution. 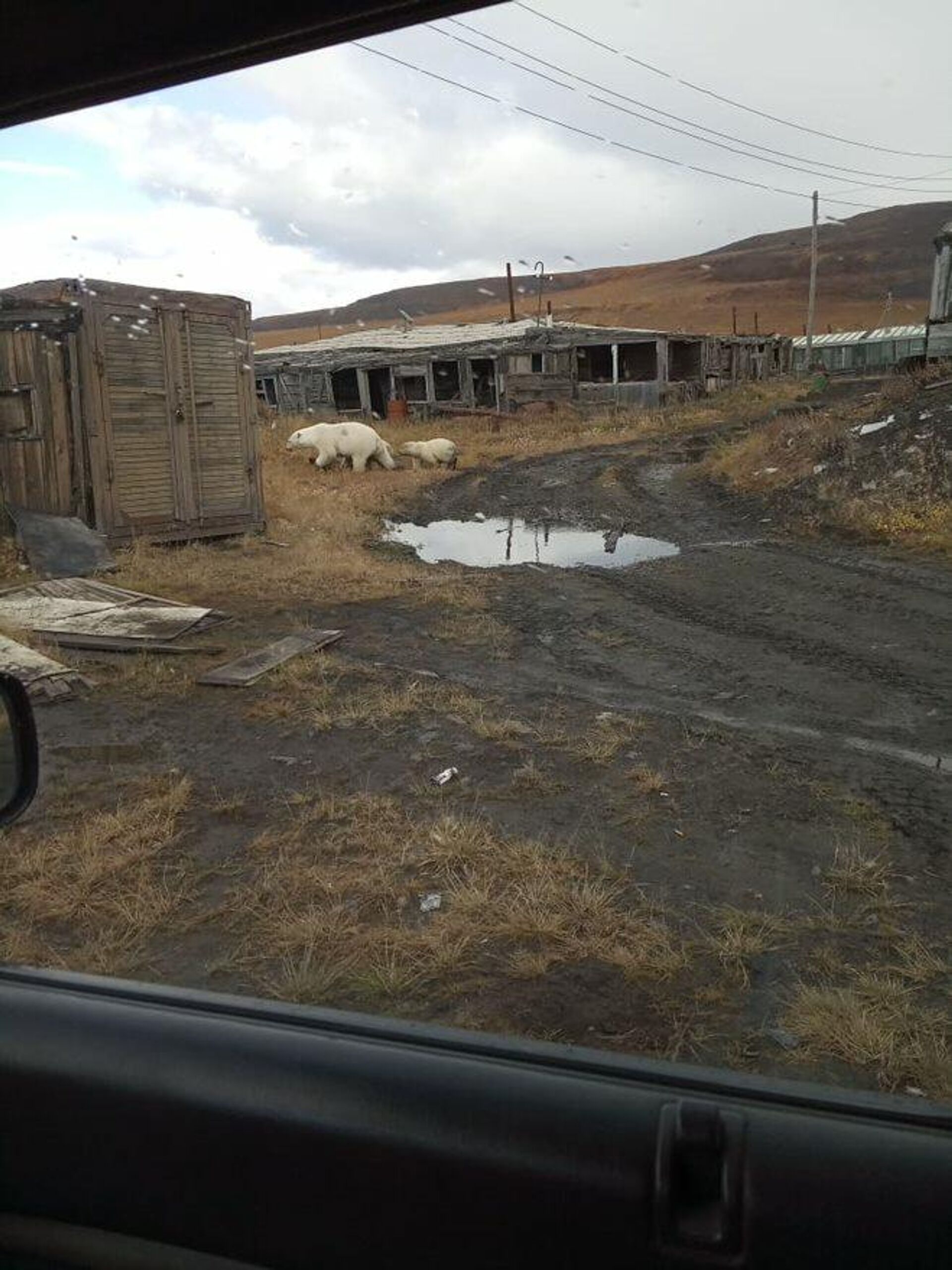 They patrol on a voluntary basis: “We do not have salaries, we are glad that they help us with fuel for equipment, spare parts, they sent a quadrocopter.”

Bears in Billings appear within six months – when there is no ice on the sea. “There were no attacks on people, but once they needed a permit to shoot: for a whole week the same predator entered the village,” Ivashev says.

Another task of the patrolmen is to clear the coast from the remains of walruses and other mammals. This is especially important for Vankarem and Ryrkaipiya – there are large rookeries nearby. So, in Vankarem, walruses are literally 300-400 meters from houses. Quite often, panic rises on the shore – sea giants run to the water, crushing each other. After that, many bodies remain on the cape, mostly young animals perish. Bears come to the smell. Any trifle can scare walruses.

“It's easy to come to an agreement with the pilots, the military who had exercises here, but you can't explain wisdom to animals. A flock of geese flies from Wrangel Island, sits down to rest next to the rookery. You can't tell walruses:“ Don't worry, it's just birds. ”The hare ran alongside – panic. A flock of seagulls flew up – the same thing. Walruses climb the rocks, then in a dream they fall down on others, they are terrified: “What fell on us?” We took out 500 walrus carcasses for three kilometers – I want to ask the bears why they don't eat there. No, they go to the village, “Sergei Kavry describes in detail.

“A year ago, a whale was thrown four kilometers from us – they got it with a tractor so that the current would not hit the village. There is a good backwater, now all the bears would be in the village,” adds Boris from Billings.

However, the bears did not always attack the villages. So, Ivashev recalls that in his childhood they walked the streets without fear. Varvara Semenova, coordinator of projects for the conservation of biodiversity in the Arctic WWF Russia, explains that the reason for everything is climate change. “At the end of the last century, active warming began. The sea ice decreased, and every year more and more bears are forced to stay on the coast, approach the villages,” she says. 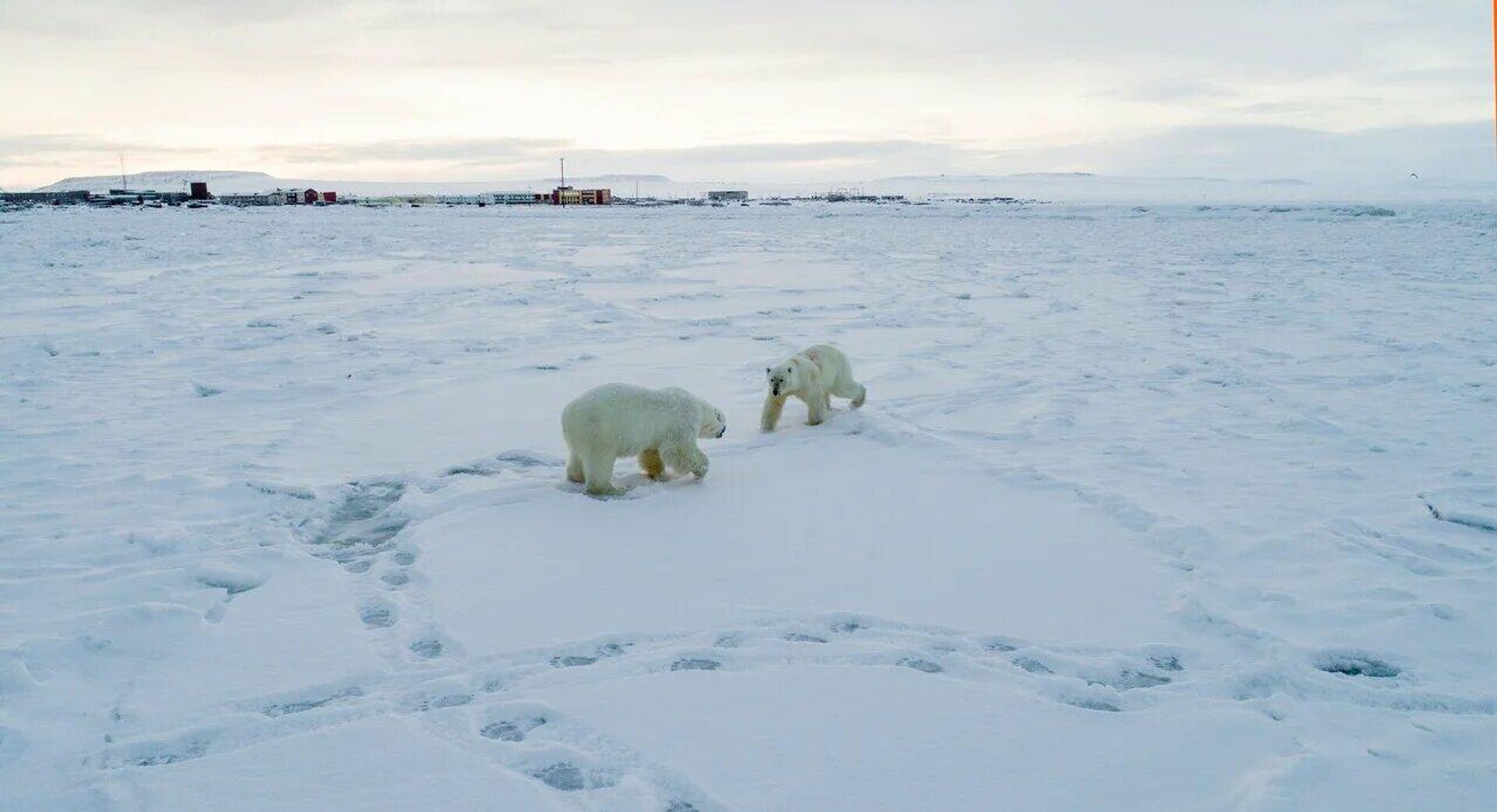 “Our sea now freezes very late,” confirms Ivashev. “Earlier in early November it was already seized, but this year – only at the end of December.”

So the main task of the “bear patrols” is to prevent a collision between a man and a beast forced to spend more and more time on the shore.

“It won't be possible to stop the warming quickly, but we can help animals adapt to natural changes. In many places where there are no patrols, bears enter the village, people give them food, and a lured predator is a living corpse. It gets used to human food, demands Most often, these animals are shot. Ryrkaypiy in the summer, when there is no ice, manages to coexist with dozens of polar bears. There live about five hundred people, and seven hundred meters from them – a rookery where walruses perish. This attracts predators, once there were six dozen of them. People are on guard, do not let animals into the village, clean the area from the remains of mammals. In the last years of the patrols, no one died, not a single bear was shot, “Semyonova specifies.

Now three brigades operate in Chukotka, several more – in Yakutia and the Nenets Autonomous Okrug, but the problem with visits of unexpected guests is not so acute there. “Each village has its own specifics. Animals come to Billings from July to almost December. But there is no rookery nearby, there are” passing “bears. And Ryrkaipiy can stay for several months. WWF helps with equipment: last year we bought a snowmobile , ATV, a tractor for harvesting walrus carcasses, “says Semenova. Special report

Winter is a relatively calm time for patrolmen. But as soon as it gets warmer, the bears need eye and eye.